If you don’t watch your mind, it will be like letting a monkey into a museum without a guard. The monkey will take a big brush and paint over all the paintings. With jealousy he’ll paint them green, with anger he’ll paint them red, with attachment, blue—he’ll put paint all over. So it’s time for us to catch that monkey, make it stop, and watch it. You don’t want to destroy the monkey—he has a right to be there—but you have to watch it. And if you watch it and train it properly, it can be useful.

Why does the monkey jump around? It looks to us as though it’s in the monkey’s nature to be mischievous, to create trouble without worrying about the value of the objects he’s destroying. But really the monkey just has a bad habit. All he needs is one little signal, and he’s off and running: Somebody looks at you funny and your anger immediately rises to the occasion.

When we try to change the monkey’s bad habits, the first thing we run into is resistance. Forget about the long-term patterns; even short term ones we’ve had only a month or two or, even for a couple of weeks, are difficult to change.

For instance, every day you go to work by a certain route. One day you need to take a different route to pick someone up, and it becomes very complicated. You may say yes to somebody, you’ll agree maybe because you can’t say no. You say yes, but in your heart of hearts you think, “I have to get up earlier. I don’t even know what road to take.” But, then if you actually do it, actually get up an hour early, it’s not that bad. If you take a different route, it’s not that bad, not that difficult. And if you keep watching your mind, sometimes you’ll be a little embarrassed, too. You’ll catch yourself. And when that happens, it’s not so bad. In fact, it’s a good sign.

~ Gelek Rimpoche from “Good Life, Good Death: One of the Last Reincarnated Lamas to Be Educated in Tibet Shares Hard-Won Wisdom on Life, Death, and What Comes After” 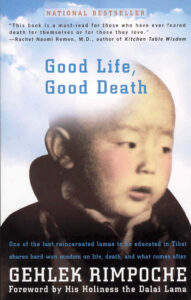