We do recommend to contemplate and meditate. So where do you begin? That’s the real question.

You can begin the Buddhist [meditation] from any level. Traditionally, in Tibet it begins with the guru-devotional practice. Traditionally, in early India, it began with the refuge. To correspond these, the guru devotional practice is part of refuge, because Buddha is the most important guru. “Guru” is a touchy word and so is “pundit.” These are Sanskrit words accepted in the Western world. There are political and economic gurus and pundits. Those are the people yapping all the time on television. So the moment you use the word “guru,” it becomes a touchy subject. But the use of the word “guru,” for spiritual practitioners and for politics are probably two different things.

I would like to repeat: the most important guru in Buddhism is Buddha, nothing more and nothing less. So guru devotional practice, though introduced in Tibetan Buddhist practice in the beginning, is definitely part of the refuge. Refuge is the doorway to Buddhist practice. To be Buddhist is to have refuge and the doorway to practice Buddhism is honoring karma. They are all important indeed. But for us, particularly if you are interested in improving yourself, making yourself a better person, contributing to the improvement of the world and the environment, it is a little too steep a climb. So from the Tibetan Buddhist point of view, where can you begin?

When Buddha became Buddha, what did he do first? That’s where we begin. Buddha became Buddha after lots of sacrifices. According to the usual historical points he spent six years in seclusion and took only the bare minimum of food and meditated in the forest. His physical body almost came to look like the branch of a tree. That is because of the heat, the wind, the dust and all this moisture – all together. He meditated like that for six years. After that he proclaimed that he had become fully enlightened. He started calling himself no longer Gautama, but Buddha. Everybody is looking for what he gained. What is that? He said, “I have a tremendous experience, profound, like uncontaminated nectar. But if I try to explain that to anyone, nobody will be able to understand. Therefore I choose to remain silent in the forest.”

After he was silent, so many made requests for him to teach and share his experience. Finally he came out and talked about four most important points, which are commonly known as “The Four Noble Truths.” When you want to know something deeper in Tibetan Buddhism I think that we should really begin with the Four Noble Truths. That is how Buddha first taught. This is absolutely relevant in our life today, in 2012. It is as relevant as it was 2600 years ago. What you have to learn, to meditate and practice is the Four Noble Truths.

The Four Noble Truths can be a very simple subject, or it can be very deep and profound. Buddha’s teachings are such that they are, on the one hand absolutely simply and fit for all. Yet on the other hand, they are so profound that only few can really master them. When we say we have to learn, contemplate and meditate, that’s what should be done. When you talk about Buddhadharma, that is the word that everybody uses for Buddhism or Buddha’s teaching. People who are interested should know what to do. That’s what we should be doing. 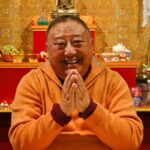