The Western language is very general [on the term] wisdom; not specific. In Tibetan, we distinguish path level from the goal level. The word yeshe refers to wisdom on the path level and on the result level. The word we use for wisdom before the path level is reached, is sherab. Both yeshe and  sherab are translated in English, as “wisdom.” So, ‘Wisdom According to the Tibetan Buddhist Approach,’ is a very big subject. The Tibetan word involves sherab and yeshe, which both are very large subjects.

I mentioned that in the Tibetan Buddhist tradition, wisdom and knowledge are combined. The knowledge is not just outer knowledge. It concerns knowledge of the nature of reality: how can we connect to a more natural or more real way of experiencing reality? When you start talking about that, it becomes a big subject, because it covers the whole idea of Buddhist philosophy. The Buddhist idea of philosophy is to find out what the nature of reality is. That involves what in the West is called philosophy, psychology, and many more of such “boxes.” In the Buddhist way of looking, all of these are joined. 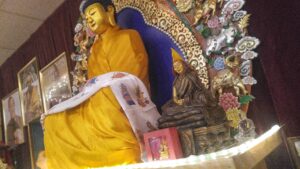