Actually Aryadeva’s “400 Stanzas” was composed as a commentary to one of the texts by his master Nagarjuna, the Mulamadhyamakakarika, the root text on wisdom. The critics say that this root text by Nagarjuna is so much in debate form, that it is not useful for practice. [The text explains] the position of non-Buddhists on atman, and this is the response to that. So it is cast in a very logical debate form and critics say that this is very dialectical and nothing to do with the practice. To eliminate that error, Aryadeva points out that the root text of his master has everything to do with practice. That’s why he composed this particular text, the 400 verses. So this is a commentary on the “root of wisdom” in many ways.

But, it is explained in a way what points to how one should engage in the practice as well, and the fundamental argument that Aryadeva is making here, is that we do need that kind of philosophical debate and inquiry to give rise to conviction as a practitioner. It is not there to belittle other traditions, and so on. All those doubts that are raised, are doubts that one will generate as a practitioner in the course of one’s own practice. To eliminate those doubts, it is not just sufficient to say “Aryadeva said so,” or “the Buddha said so.” That would be more belief-oriented. But that is not sufficient, in terms of transformation. Therefore, one has to be philosophically and analytically convinced. That’s why debate is so important.

If there is a natural doubt in form of a debate, you have a kind of dialog and you eliminate the doubt through the logical debate. The purpose of debate is to generate strong conviction that is born out one’s own analysis. This is going to come through very clearly in the text. But the commentary to the commentary is done by Gyaltsab-je, the first regent of Je Tsongkhapa. He is the second Ganden throne holder. 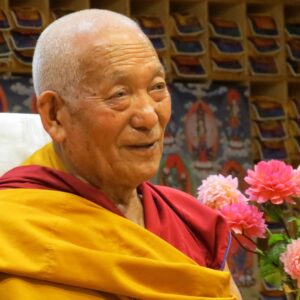