When Buddha was not yet a buddha, he was in the hell-realm. Both Buddha and another guy were used to pull a cart to plough the land, like horses. The guard that was behind them, was beating this other guy. Buddha looked at his companion and developed a tremendous amount of compassion. And when this companion fell down, they started beating him up even more with electrical whips. Buddha felt a tremendous compassion towards that fellow and he tried to do a little more than he could in order to help the other one; he tried to pull both horse carts by himself. He developed the bodhimind right at that level. Now that hell administrator got so angry about that, “You try to do both by yourself!” and he hit Buddha on the head with a hammer. Buddha died there and was reborn as a human being. That is how Buddha developed the bodhimind.

So the bodhimind can be developed at any stage. Whatever the state or realm you may be in, if you develop the bodhimind you become a bodhisattva. Jamgon Tsongkhapa has said [in his Lam rim chen mo]:

Whether the dharma you practice is Mahayana dharma or not, is not important.

If so then your practice will also become Mahayana.

When you say ‘Mahayana’ what is meant is the bodhimind itself, nothing else.

If you have a very rough understanding of the bodhimind then you will have an equally rough practice of Mahayana; if you have a smooth, great bodhimind all your practice will be great and smooth bodhisattva practice.

If you have a half-half understanding of it then your practice will also be half raw, half cooked.

If you don’t have the bodhimind within you, then whatever you do, even if you practice the great Guhyasamaja developing or completion stage, forget about obtaining buddhahood, you won’t even get to the first stage on the Mahayana path.

If you do not develop the bodhimind and you do a lot of Vajrayana practice, then no matter how great, how deep or how profound the practice might be, you won’t even obtain the first path of the Mahayana, the path of accumulation. Pabongka Rinpoche adds up:

That practice of Vajrayana will not even become a Mahayana dharma. But if you have the bodhimind with you, then even saying OM MANI PADME HUM once is a Mahayana practice and will therefore be the cause for becoming a buddha.

So developing the bodhimind is important and benefits you. Nagarjuna says:

If you and the rest of the world

Its roots are the altruistic inspiration to enlightenment, firm like Meru, the king of mountains,

The compassion which reaches to all quarters,

The wisdom which relies not on duality.

If you want to obtain buddhahood, you have to obtain a very stable bodhimind, unshakable like a mountain. You need to have that very strong, solid foundation. If you have that, you can aim for buddhahood. If you do not have this mind and you try to practice the development stage of Vajrayana, your practice will be like visiting a museum, looking at an exhibition of mandalas. And if you try to practice the completion stage, doing the [breathing] exercises will be like blowing a pair of bellows. So the quickness and profoundness of Vajrayana is influenced by the bodhimind.

The great Changkya Rolpai Dorje, a seventeenth-century great master who had been the teacher of the emperor of China, came to Central Tibet and tried to obtain a lot of initiations from a lama called Purchok Jampa Rinpoche. Whenever this lama was giving an initiation, during the explanation before the initiation he always talked about the Lamrim points rather than about the Vajrayana points. So many people felt that it looked as though he had nothing to say about tantra. But Changkya Rolpai Dorje said, “This is the clear sign that he really knows where the key lies.” 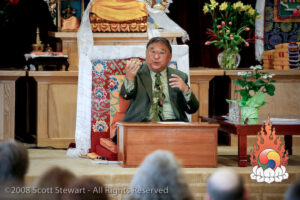 The Enchantress – from Jataka Tale 13