Let me very briefly remind you of the recommended motivation: “For the benefit of all sentient beings, I would like to attain the state of a buddha, for which I would like to learn about Tara, the mother of all Buddhas, and practice and help myself and all other beings.” With this motivation, do kindly continue reading.

Continuing with our short Tara practice, next will come the twenty-one verses of praise to Tara. I don’t know who wrote these twenty-one praises of Tara. I didn’t pay any attention. These verses come from a very long time ago, maybe even before Buddha. I don’t know when, and I have no idea who put them together. The Tibetan people use these verses as a very common praise to Tara. Almost everywhere, people say the same the old prayer, whether in a monastery with thousands of monks, or an old couple in a remote area or village somewhere. Almost everybody says this prayer, the Twenty-One Praises of Tara.

The Twenty-One Praises in Tibetan can simply be said as a praise to a single form of Tara, but also has two different practice traditions for visualizing twenty-one different forms of Tara. 1 One is the version of Atisha. While Tibetans call him Atisha, Bengalis don’t understand who you mean when you say that name. I have met a number of Bengalis, not scholars, but taxi drivers and merchants. When I would tell Bangladeshi taxi drivers in New York City about Atisha, they would say they knew nothing, but when I mentioned Dipamkara, they immediately knew all about Dipamkara, the Bengali teacher.

Today East Bengal is part of Bangladesh. When I first went to India and lived in Delhi, this was all part of India. Then there was a war between India and Pakistan, and Bangladesh was created. Mostly the Indians used Tibetan guerilla trainers who were supposed to be challenging China in the creation of Bangladesh. Most of the Muktibanis were Tibetans. The Tibetan brigades had to travel at night, take over one town, and disappear in the early morning. Then the Bengalis would come with sticks and jump around, and the radio and television would announce that the people took over this or that town. Finally, about 5000 or 6000 Pakistani army soldiers had to surrender to the Indian army in Dhaka and Bangladesh was created. Earlier, after the 1949 partition, it was East Bengal, a part of Pakistan.

Tibetans call him Atisha Dipamkara Shrijana. He brought the refined Buddhist teachings to Tibet from the Indian institutions such as Vikramshila, where he was from, and from Nalanda. Those great refined teachings were brought to Tibet by Dipamkara Srijana Atisha. Atisha’s version of how to visualize the twenty-one Taras shows the normal Tara appearance twenty-one times times. Each of them has her own color and vase color. Another version of the twenty-one Taras is by Mahasiddha Nyima Päba (often abbreviated as Nyi Bay). In Sanskrit his name is Suryagupta. Surya is Sanskrit for the sun (Tib: nyima). In his version all of the twenty-one Taras have completely different appearances, with lots of hands and hand implements. It is hard for people who are not familiar even to recognize them as Taras since they look completely different. One of them is riding on a bird, one on an elephant; I don’t remember exactly. At least in Tibet, there are these two well-known versions of the visualizations of twenty-one Taras.

This praise of Tara has been translated from so many different Indian dialects into Tibetan. That’s why there are even different versions of the Tibetan words. Whether in the Sakya, Nyingma, Gelug, or Kagyu tradition, wherever you go this praise to the twenty-one Taras is the same. In old Tibet, the many different monasteries or groups of people or families all said the Twenty-One Praises of Tara but with very different tunes and styles. Each monastery has its own. I am used to the Drepung Loseling version. Loseling has its own tune and rhythm for saying this. Every night, the monks gather and say it at least twenty-one or thirty times, that many. They sort of roll all of them together, so it goes very fast. Then some people will do it in a sort of singing or chanting style; all the nunneries do that.

I’m sure many families also say it within their own little realm. Almost all Tibetans do say this Twenty-One Praises of Tara prayer daily. Many families get together in their own homes in the morning or evening, kids and parents sitting together, and say this. This took place everywhere in Tibet until 1959. After 1959, when many Tibetans came to India, this changed slightly.

Now it is not said as much; they somehow relaxed that. Today many say it, and many don’t. Almost everyone says the refuge prayer, the Twenty-One Praises of Tara, and the longevity prayer for the Dalai Lama or something. Then, of course, Gelugpas will also say the Ganden Lhagyema or lama chöpa, Nyingmapas will say Vajraguru or that type of thing, Kagyupas will say whatever they say, Sakyas will say their different prayers. Before 1959 they would all say this Tara praise, commonly as refuge and then the Twenty-One Praises of Tara. There was no difference. The seven limbs also came together with that and everybody would say this very seven limbs prayer. It was said in monasteries, in small families, and by individuals, everywhere. 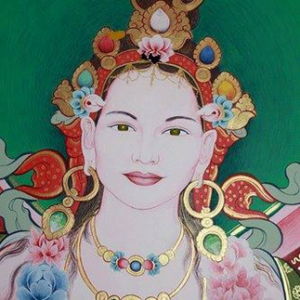