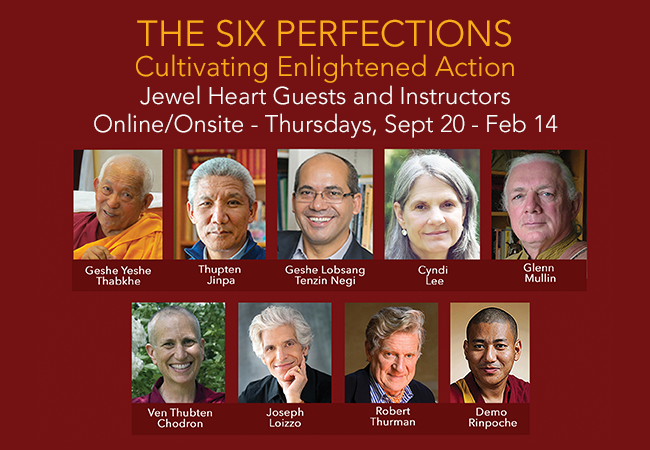 Buddha teaches us how to clear our inner obstacles and deepen our capacity to be loving, compassionate and wise. The Six Perfections highlight that process through recognition of how we conduct ourselves in everyday life with regard to ourselves, to others, and to the world around us.

On the basis of six bodhisattva activities, the tenacity of our obstacles and the liberating potential for personal growth become clear, affording us an opportunity to gradually move from limitation to perfection.

In this 15 week course, we will visit the challenges and triumphs of the Six Perfections – Generosity, Morality, Patience, Enthusiasm, Concentration and Wisdom – with weekly sessions alternately presented by Jewel Heart Instructors and Guest Speakers who are longtime friends of Gelek Rimpoche and Jewel Heart.

Sessions from September 20 to November 15 will focus on the first four perfections, while January 10 to February 14 will focus on Concentration and Wisdom. 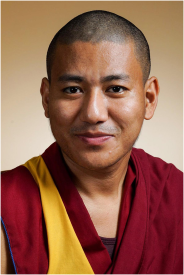 The 11th Demo Rinpoche will be teaching. Demo Rinpoche was born in Tibet and was recognized by the Dalai Lama at the age of 5 as the reincarnation of Gelek Rimpoche’s father, whereupon he entered Drepung Loseling Monastery. He received his Geshe Lharampa degree there and continued in tantric studies for several years after. In 2018, he earned a master’s degree from Union Theological Seminary in New York, where he studied Interfaith Engagement. 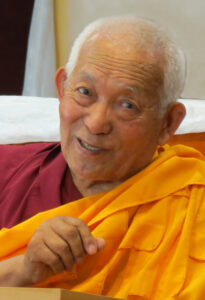 Geshe Yeshe Thabkhe is a genuine contemplative master and a member of the last generation extensively trained in old Tibet. He received his monastic education at Drepung Loseling Monastery and, in 1969, was awarded the Geshe Lharampa, the highest degree of scholarship conferred within the Geluk School of Tibetan Buddhism. He is Professor Emeritus of Buddhist Philosophy at the Central University of Tibetan Studies, the only Tibetan university in India. His scholarly work includes a translation of The Essence of Good Explanation of Definitive and Interpretable Meanings (Tib. Lek-Shey Nying-Po) by Tsongkhapa into Hindi, and A Commentary on the Rice Seedlings Sutra (Skt. Salistamba Sutra) by Kamalashila. He has facilitated numerous other research works, including the complete translation of Lama Tsongkhapa’s The Great Treatise on the Stages of the Path to Enlightenment (Tib. Lam Rim Chen Mo), a major project undertaken by The Tibetan Buddhist Learning Center in New Jersey, where he teaches regularly. Jewel Heart has had the honor of hosting Professor Geshe Yeshe Thabkhe for many years.
Click here for more about Geshe Yeshe Thabkhe’s September 7 – 23, 2018 teachings on Aryadeva’s 400 Stanzas on the Middle Way onsite and online from Jewel Heart Ann Arbor. 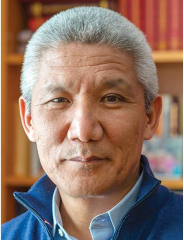 Thupten Jinpa, Ph.D., holds a Geshe Lharampa degree from the Shartse College of Ganden Monastic University, South India, as well as a B.A. Honors in philosophy and a PhD in religious studies from Cambridge University. Jinpa has been the principal English translator to H.H. the Dalai Lama since 1985 and has translated and edited numerous books by the Dalai Lama including The New York Times’ bestseller Ethics for the New Millennium. His own publications include numerous works in Tibetan and English, and translations of major Tibetan works. His latest book is A Fearless Heart: How the Courage to be Compassionate Can Transform Our Lives. He is the main author of CCT (Compassion Cultivation Training), an eight-week formal program developed at the Center for Compassion and Altruism Research and Education (CCARE), Stanford University. Jinpa is an adjunct professor at the Faculty of Religious Studies at McGill University, the founder and president of the Institute of Tibetan Classics, and the chairman of the board of the Mind & Life Institute. 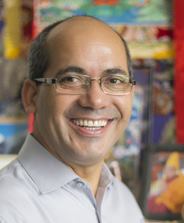 Geshe Lobsang Tenzin Negi, Ph.D. is a Professor of Practice in Emory University’s Department of Religion and the founder and spiritual director of Drepung Loseling Monastery, Inc., in Atlanta, GA. He is also the co-founder and director of the Emory-Tibet Partnership, a unique multi-dimensional educational initiative founded at Emory University in 1998 which includes the Emory-Tibet Science Initiative (ETSI), an educational program created at the invitation of His Holiness the Dalai Lama to design and implement a comprehensive modern science curriculum specifically for Tibetan monastics.

Additionally, Dr. Negi serves as the executive director of the Center for Contemplative Science and Compassion-Based Ethics at Emory University. The mission of the Center is to develop, implement and evaluate evidence-based educational programs grounded in compassion-based ethics in order to cultivate social, emotional and ethical well being for both self and others as global citizens in a multicultural world.
The Center houses a program in social, emotional and ethical learning for kindergarten through high school known as SEE Learning, courses in secular ethics at the university level, as well as CBCT® (Cognitively-Based Compassion Training), a compassion meditation program developed by Dr. Negi that is based on Tibetan contemplative methods and taught as both a research protocol and to the public for personal enrichment.
Dr. Negi was born in Kinnaur, a remote Himalayan region adjoining Tibet. A former monk, he began his monastic training at The Institute of Buddhist Dialectics in Dharamasala, India, and continued his education at Drepung Loseling Monastery in South India, where in 1994 he received his Geshe Lharampa degree—the highest academic degree granted in the Tibetan Buddhist tradition. Dr. Negi completed his Ph.D. at Emory University in 1999; his interdisciplinary dissertation centered on traditional Buddhist and contemporary Western approaches to emotions and their impact on wellness. His current research focuses on the complementarity of modern science and contemplative practice. 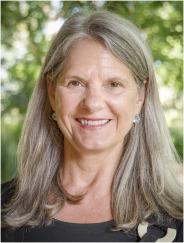 Cyndi Lee is the first female Western yoga teacher to fully integrate yoga asana and Tibetan Buddhism. She is the author of Yoga Body Buddha Mind, and May I Be Happy: A Memoir of Love, Yoga, and Changing My Mind. Cyndi holds an MFA in Dance, is a long time student of Gelek Rimpoche and is currently training to be a Zen Chaplain under the auspices of Roshi Joan Halifax, emphasizing service in areas of women’s health and physical resiliency practices.
For more about Cyndi Lee, visit http://www.cyndilee.com/ 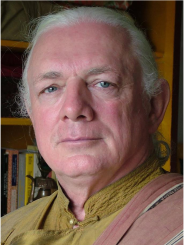 Glenn Mullin is a Tibetologist, Buddhist writer, translator of classical Tibetan literature, and teacher of Tantric Buddhist meditation. He studied philosophy, literature, meditation, yoga, and the enlightenment culture under thirty-five of the greatest living masters of the four schools of Tibetan Buddhism. Glenn is the author of over 20 books on Tibetan Buddhism, founded and directed the Mystical Arts of Tibet, and has curated a number of important Tibetan art exhibitions. He divides his time between writing, teaching, meditating, and leading tour groups to the power places of Nepal and Tibet. 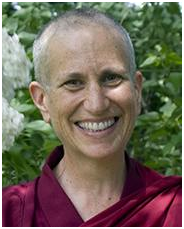 Venerable Thubten Chodron is an author, teacher, and the founder and abbess of Sravasti Abbey, the only Tibetan Buddhist training monastery for Western nuns and monks in the US. She graduated from UCLA, and did graduate work in education at USC. Ordained as a Tibetan Buddhist nun in 1977, she has studied extensively with His Holiness the Dalai Lama, Tsenzhap Serkong Rinpoche, and Kyabje Zopa Rinpoche. She received full ordination as a bhikshuni in 1986.

Ven. Chodron teaches worldwide and is known for her practical (and humorous!) explanations of how to apply Buddhist teachings in daily life. She is also involved in prison outreach and interfaith dialogue. She has published many books on Buddhist philosophy and meditation, and is currently co-authoring with His Holiness the Dalai Lama a multi-volume series of teachings on the Buddhist path, The Library of Wisdom and Compassion. The first volume, Approaching the Buddhist Path, is available July 2017.

Visit https://thubtenchodron.org for a media library of her teachings, and sravasti.org to learn more about Sravasti Abbey. 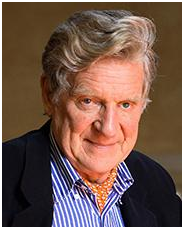 A graduate of Harvard University, PhD in Buddhology, Robert Thurman is the Jey Tsong Khapa Professor of Indo-Tibetan Buddhist Studies at Columbia University. In 1972, he founded the American Institute of Buddhist Studies, with the mission to research and translate the 4,000 works of the Tibetan Tengyur into English. These volumes are gradually being researched, translated and published with Columbia University Press as Treasury of the Buddhist Sciences.

In 1987, he co-founded, with Richard Gere and Philip Glass, Tibet House US, dedicated to the preservation and renaissance of Tibetan civilization. In 2001, he co-founded with Nena Thurman the Menla Mountain Retreat Center in the Catskill Mountains to advance the life sciences and healing arts of the Indo-Tibetan Buddhist medicine tradition.

Thurman is the translator of The Tibetan Book of the Dead, and author of many books, including Inner Revolution, The Central Philosophy of Tibet, The Brilliant Illumination of the Lamp, Wisdom and Compassion: The Sacred Art of Tibet, Infinite Life, The Jewel Tree of Tibet, Circling the Sacred Mountain, and Why the Dalai Lama Matters. 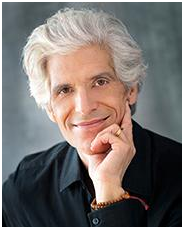 Joseph Loizzo, M.D., Ph.D. is a contemplative psychotherapist, clinical researcher, and business consultant who integrates ancient contemplative science and technology with contemporary breakthroughs in neuroscience and optimal health. He founded Nalanda Center for Contemplative Science and is on the faculty at the Weill Cornell Center for Integrative Medicine and the Columbia University Center for Buddhist Studies. He has published books, translations, and several articles and also has a private practice in Manhattan.